The article was written by DESIblitz.com writer Nicky Kullar and covered the change in how attitudes of British Asian women have changed towards smoking. It reflects on how independence,  financial security and choice all contribute to today’s British Asian woman being so different from those of the past, and why smoking is part of their lifestyle now.

The BBC Asian Network show attracted large numbers of listeners to phone-in and discuss the issue. With many callers giving their strong opinions raised by the article.

A lady caller,  pharmacist Shenu, suggested that there were three main reasons that women smoke which are loss of cultural values and discipline, peer pressure, and for the third reason she said:

“I think parents cannot control their children as they use to in the old days.” She was very much concerned about the apathy towards statistics which are rising related to smoking.”

Nihal talked about how the article describes changes in British Asian society such as sheesha lounges on the increase. Many callers texted giving their reasons for smoking and Asian men stating how much of it is a turn-off if Asian women smoke. One text picked up the point made by the article that India ranks third in the highest female smokers in the world.

A Punjabi lady, Manjit, called and stated her concern for her nieces smoking who are in their early 20’s. She told Nihal that it stems from peer group pressure and them going out nightclubbing, and said

“I think it looks a bit cheap.” 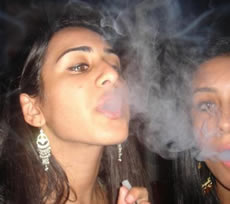 The article describes how peer pressure is one key attribute towards why British Asian women smoke and the newer generations are taking up smoking as part of their social lifestyle.

The article describes how Ramanjeet is an investment banker uses smoking as a method of networking with people at work. In the programme, businesswoman and ex-smoker Rita Yahdev said:

“Now I see it’s really not elegant, it’s dirty, it’s un-classy but a lot of my friends do still smoke.”

The interaction continued from callers as Nihal referred to the article and stated that Asian women smoke to express their freedom and choice. A male caller was very impressed by the show and about the points made. He said: “In Leicester children as young as 11 or 12 use their dinner money and get adults to buy them cigarettes.”

A young Brit-Asian girl smoker called Sara spoke to Nihal and said she saw no difference to why women can’t smoke compared to men, especially in the family. She said:

“Obviously for an Asian woman to smoke you have all the family pressure but at the end of the day I put my foot down and said if you smoke so will I.”

Sara who is addicted to smoking has 10/15 cigarettes a day.

The show was rounded up with a huge number of texts and emails from listeners, including the support for the writer and DESIblitz for the article, which gave great subject matter for the Nihal Show on BBC Asian Network.

This shows how Aidem Digital has nurtured and encouraged one of its writers for DESIblitz.com to write about a controversial area related to British Asian society. Giving the writer a platform to develop confidence in their ability and writing skills, which in this case, has been noticed and adopted by BBC radio for a debate.